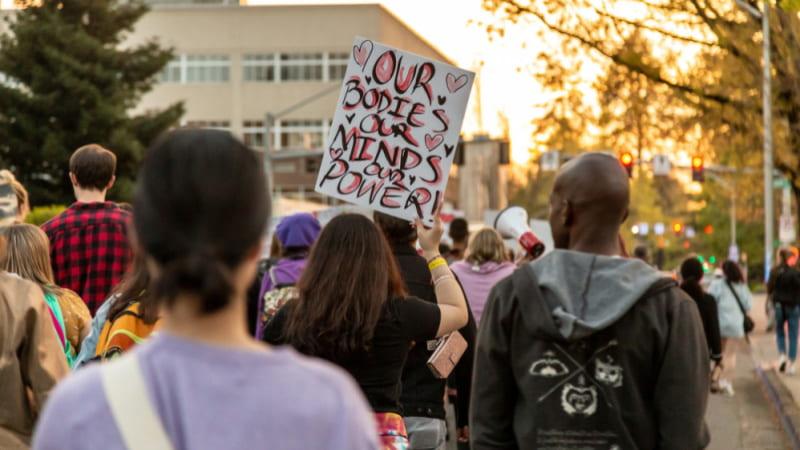 From Around the O—After two years as a virtual event due to the pandemic, Take Back the Night is returning as an in-person gathering on the University of Oregon campus and downtown Eugene.

Known formally as the Take Back the Night Rally, March and Speak Out Against Sexual and Domestic Violence, the event takes place Thursday, April 28. It starts with a rally at the Erb Memorial Union amphitheater at 6 p.m., followed by a march at 7 p.m. and a speak-out at 8 p.m.

After the campus rally, the survivor-centered event continues as a march through the streets of Eugene to symbolize reclaiming people’s safety on public streets at night. It ends with a student-led speak out on campus, during which survivors can share personal stories of how sexual and domestic violence has impacted their lives.

The rally will feature UO student speakers from diverse backgrounds, including the Native American, Latinx, LGBTQIA+ and international communities, and many more.

Take Back the Night is fragrance-free and wheelchair accessible, and transportation is available to and from the speak out. American Sign Language interpretation also will be provided at the rally.

Rally organizers ask that no UO professional staff or media be present during that portion of the event to provide space for students to have dialogue circles of peer-to-peer support.

Take Back the Night is put on by the UO Women’s Center in collaboration with the UO campus groups, including UO Muxeres, Alpha Chi Omega Sorority, Hope & Safety Alliance, the UO Green Garter Band and more.

The event will take place rain or shine and is free and open to the public. Masks are not required but are highly encouraged. For additional information, contact Kati Rodriguez Perez or Fatima Roohi Pervaiz at the UO Women’s Center.